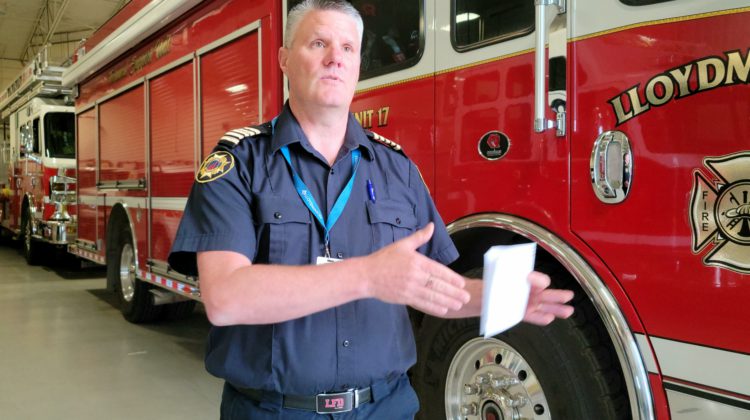 “Well I think some of our biggest challenges now are fire prevention and education. And we have been focussing on that. We have seen some significant progress with that. We have well over 1000 businesses within the City that fall under the requirements of annual fire inspections.”

Lloydminster Fire Chief Leigh Sawicki says they will focus on the higher risk industries in the area as they build for the future. His observation come as the local Fire Department presented it’s Q3 update to Council. 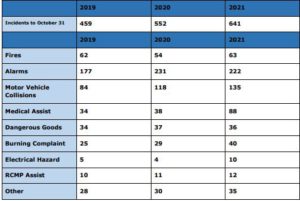 Fire Department report as at October 31, 2021. [Source: City of Lloydminster]

The report notes a 14 per cent increase in service calls for the first 10 months of this year compared to last year. That’s 641 calls for service as at October 31st compared to 552 for all of 2020.

It highlighted regional relationships as the Fire Department has regional agreements with surrounding communities including the County of Vermilion River, R.M. of Britannia, R.M. of Wilton, and the Rescue Squad.

The City is also working with Cenovus on creating a working MOU which the Fire Department hopes to see completed next year.

“You can see what’s going on in B.C. right now and if we did not have those agreements here, and we had events that are going on like there, it would be harder to have those working relationships and work effectively in those emergent situations. So I think building on the successes of putting these agreements in place will only help us in the future, whether it’s through training or emergency response.”

On the training front Sawicki noted they are getting increased motor vehicle calls, so they are beefing up on training to deal with heavier vehicles including trailers transporting livestock.

“Our vehicle accidents increased over the last several years. We never really went to vehicle accidents in the past and we are focussing on that as a service level that we feel we should be doing within the City to ensure that the public is kept safe in those types of emergencies.  So some of the things we have looked at is our heavy rescue capabilities and that would be your tractor trailer units versus small passenger vehicles.”

He said they are making sure they have the proper equipment and training for those emergencies.

With construction continuing on the east side of the City for the new fire hall number one, Sawicki shared that the fire crew is pretty excited about taking occupancy.

“It’s a nice change for the guys in the hall to have a building that meets the needs of what we do for the City and having training capabilities.”

The new building will house administrative staff and could see occupancy by the middle of next year, according to the Fire Chief.