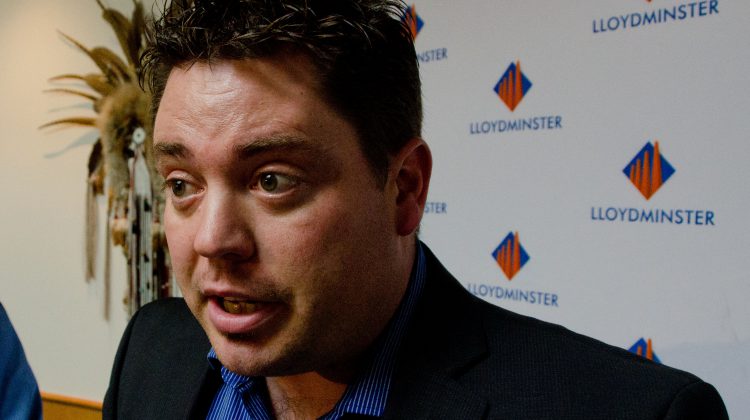 Deputy CAO for the City of Lloydminster Kirk Morrison speaks during a press scrum held after the meeting of City Council on Tuesday, May 24. Photo by James Wood/106.1 The Goat/Vista Radio

The City of Lloydminster has unveiled the names of its employees who made above $50,000 in the last fiscal year.

The move to make the information available was the result of an access to information request filed back in December of 2015. The written response to the request had stated the deadline for the information to be posted fell on April 11, 2016.

When previously speaking to the press about the publishing of the salaries, Deputy CAO Kirk Morrison had said the information would likely be posted on the City website, in the Legislative Services section.

However, the information was not posted by the previously discussed deadline, and did not end up in the Legislative Services section of the website.

When asked why this took place, Morrison said the decision was made to release the information as part of the “Report to the Community” a document released on May 5, 2016 during the latest Your Voice event held by the City.

“We were able to include those salaries as part of the ‘Report to the Community’, as part of our financial statements,” said Morrison.

“We’re going to be building this into our regular planning and business cycle, so with that report being so close to our anticipated release of that information, we felt it was appropriate to include it.”

Morrison said salary information will be published on an annual basis. He also said the City is looking at putting mechanisms in place to allow the municipal government to report expenses as well.

The information is now available on the Finance section of the municipal website, located at the tail end of the Consolidated Financial Statements. The salaries are organized by alphabetical order, with the amounts made by each employee listed beside their name.

Public information on benefits and expenses is not currently available from the municipal government. A link to the Consolidated Financial Statement is here: http://bit.ly/1s8lVHE