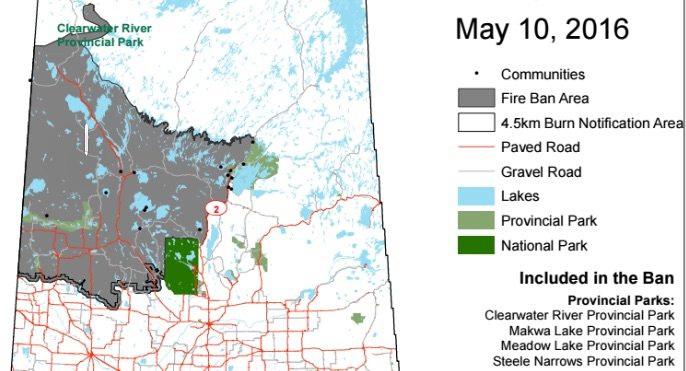 The Saskatchewan Ministry of Environment and the Ministry of Government Relations have issued further fire restrictions for the province, due to extreme wildfire conditions.

Open fires have now also been prohibited for provincial forests on the west side of the commercial forest. The ban is bounded by the Alberta border on the west, and the Clearwater, and Churchill rivers east to Highway 2.

The national park is not included in the provincial fire ban.

All burn notification numbers – issued to those planning to burn in or within 4.5 kilometres of provincial forests – for the ban area are revoked.  Fireworks are also prohibited.

CSA-approved propane heating devices and barbecues, pressurized stoves, or charcoal briquettes used in a ministry-approved firebox will be permitted for cooking and heating purposes for the duration of the ban.
The provincial fire ban will stay in place until conditions improve and the Ministry of Environment rescinds the order.