Notley expresses sympathies for the family of Taliyah Leigh Marsman 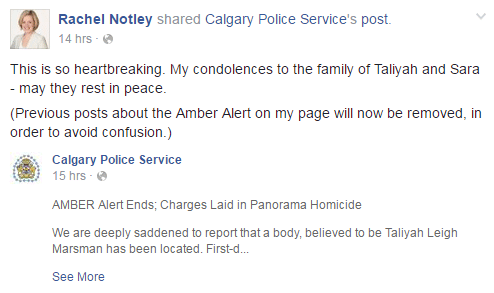 Premier Rachel Notley has spoken out about the tragic death of young Taliyah Leigh Marsman.

The 5-year-old went missing in Calgary earlier this week after her mother was found dead in their home, since ruled a homicide.

Notley wrote a Facebook post in addition to releasing an official government statement, expressing the brokenhearted feelings much of the province is experiencing since the news, having prayed for the safe return of the girl.

Condolences were offered to the family of Taliyah and her mother, Sara Baillie, as well as gratitude extended to the Calgary Police force who worked tirelessly in the hopes of bringing Taliyah home.