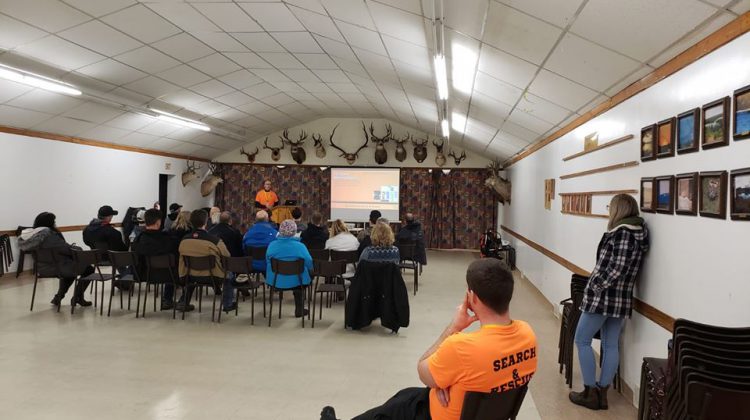 The SARSAV held information nights in November and January to gain members for the new Battlefords chapter. (Photo: Battlefords Search and Rescue Facebook)

Battlefords RCMP gains some help as a new search and rescue group looks to be ready by the spring.

The second Search and Rescue Saskatchewan Association of Volunteers information session held on January 20th looked to inform potential volunteers and residents on how the group will serve the community.

The Battlefords chapter will cut wait times on activated search and rescues by a couple of hours as team members would have to travel from other areas such as Meadow Lake.

The Chapter’s vice president Nathan Bartholomew says RCMP has been in discussions with the association during the formation of the Battlefords chapter. The group will begin a search and rescue effort only when activated through the RCMP.

“If the detachment in that area, such as North Battleford, Maidstone or Cut Knife, if they have a missing person case where they require outside resources, they can request outside resources. One of their resources is their RCMP search and rescue team. That team looks at the situation and makes the decisions to activate us.”

Bartholomew says the group will take any aid they can gain to help rescue efforts.

“The support we can get from the public, either for individuals joining or in the form of fundraising, donations, those are important too because we’re unpaid to do what we do.”

The SARSAV also has preventative search and rescue programs where they go to organizations presenting ways to prevent people from going missing. The volunteer-run group will cover a 100km radius in the Battlefords and surrounding areas.

“In 2019, there were at least four searches that Saskatoon search and rescue, which I am a part of, activated that in the Battlefords area. In some ways that don’t sound like a lot of activations but that is four more than we got ten years ago.”

Between the group’s meeting in November and this past week, Bartholomew says 70 people showed up in total. He says the public’s response has been generally in favour of the group’s new division in the community.

In total, the new division has nine approved applicants aiming to have 15 by May. Over the next couple of years, Bartholomew says they look to have 20 volunteer crew.

Anyone looking to join the Battlefords chapter can contact Battlefords Search and Rescue through Facebook or email at [email protected] Training sessions will commence for approved applicants in the next couple of months.