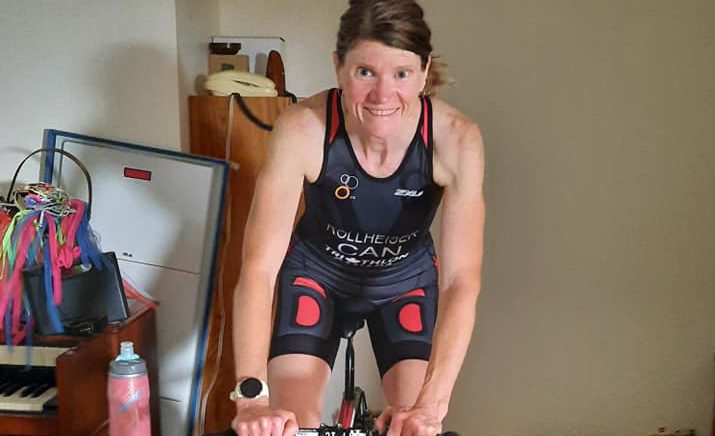 Pam Rollheiser has brought back her Tri-1 For Life campaign for another year and is powering through an injury to make it happen.

The charity triathlon was first undertaken by Rollheiser in 2020 to raise money for the Canadian Cancer Society, she ended up raising almost $5,000. This inspired her to get the ball rolling for a second run of the event this year, which will run on August 9th starting at 5:30 p.m.

In her training, however, she ended up having a fall that took her out of action for a while with a broken foot. At first, wondering if Tri-1 would go ahead and if she would be able to do it, Rollheiser says she’s been receiving encouraging support which pushed her to continue.

“I’ve had so many people sending me well-wishes, and I know that I will use the strength of the people I know that are fighting cancer, that I’m raising the money for, all the people that have made the donations. I will use all of that strength to get me through that.”
- Advertisement -

Since the injury, Rollheiser gradually returned to training and determined she’d be able to do Tri-1 For Life once again. She is working around her injury in this year’s event, but that doesn’t mean she’s scaling back.

Her swim portion of the race will be done at the BioClean Aquatic Centre using a floatation device that allows her to swim without the use of her legs.

Then, she’ll hop on a modified bicycle with one pedal, which will be attached to her winter training machine. She’ll do 20 kilometres on that bike. From there, she’ll do a five-kilometre run, while still on crutches.

Rollheiser says she’s been getting close to achieving the distances set out for the race during training, and she’s confident she’ll be able to get the job done Monday, even if some parts seem daunting.

“I think I can do it, for sure. The swim I’m feeling good with, I know I can do that one and the bike, it will be tough, I know that already, but I’m pretty sure I can make those 20. Five kilometres on the crutches, I’m a little nervous on that one.”

Residents are encouraged to come to the BioClean Aquatic Centre on the afternoon of August 9th to cheer Rollheiser on, take part in events being put on by her family or try 7 Summits Snacks, which will be showcasing their products at the event.

Donations will be set up at the event for the Canadian Cancer Society, and people can also find links to donate on the Tri-1 For Life Facebook page.