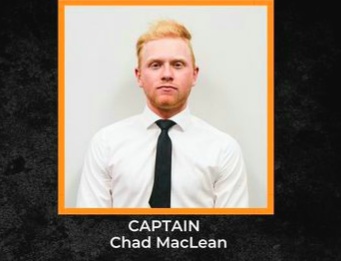 Chad MacLean is in his fourth year in the AJHL as he takes on the mantle of captain of the Lloydminster Bobcats.

The Calgary product acknowledges the role of previous captains as well as the support and guidance he has gotten from the Bobcats outfit as they made the appointment this week. On his leadership style and work ethic, he credits the advice from his parents.

“Straight hardwork will get you a lot of places in life. We are going to be a hardworking team. Hard-hitting. We do have a lot of skill in our lineup with a couple acquisitions we made, so we should be able to put the puck in the net.”

MacLean says he leads by example and notes the guys are having fun as they look forward to the season and the camaraderie of AJHL. MacLean says the team acknowledges the hardworking spirit of the Border City.

“Absolutely. That’s just the identification of this town. There are so many hardworking people in Lloydminster that are just great people. So that’s what we want to bring to the table, is just hardwork and we just got to get the job done.”

The Lloydminster Bobcats travel to Bonnyville Friday night and then host the Pontiacs this Saturday at the Civic Centre.