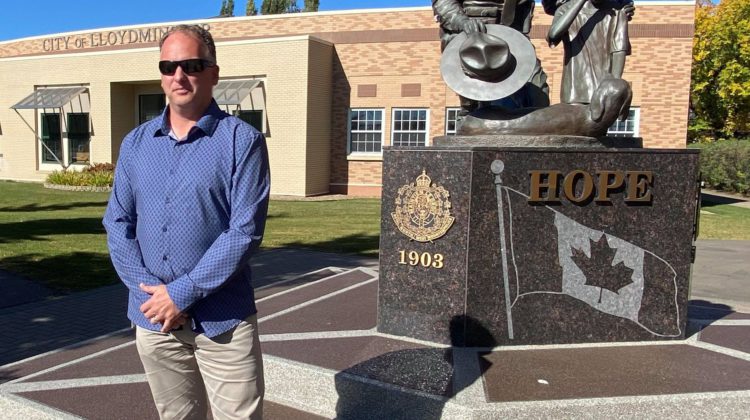 Aaron Buckingham stands outside the Hope Monument as he announces his run for a second council term. [Dan Soul/106.1 The Goat]

Lloydminster City Councillor Aaron Buckingham will be seeking another term this election.

The incumbent Buckingham, who was elected for the first time back in 2016, is the first sitting Councillor to announce re-election plans. He joins current Mayor Gerald Aalbers, who said he would seek re-election back in February. Darrell Dunn, Rhiannon Greening, Cheryl Ross and Lorlee Marin have also announced their plans to run for a municipal seat in this election.

Buckingham explains that his choice to run again is based on the belief that there is still more work to do, and that a person serious about being on the council should seek to stand on their record with voters in a second election.

“There were a lot of great lessons learned over the last four years, and I’m looking forward to having the opportunity to serve for another four years if the city so chooses to do that.  It’s a continual learning experience, and if you stop learning, you’re dangerous. I don’t claim to know it all, [there’s still] lots to learn, lots of projects left to do, and I’d be glad to be there to see these projects through.”

With several economic impacts facing the City because of declining oil prices, COVID-19 and other concerns, Buckingham says whoever makes up the new council will have a challenging term to face. He adds that this is a challenge he’s willing to undertake through possibilities like diversifying the City economy, looking at making Lloydminster an industrial and distribution hub.

“For me, I need to make sure that we are open for business. That people that are looking for places to set up shop know that Lloydminster is a place they can do business. We’re perfectly located between two major centres in Edmonton and Saskatoon, two major highways, both major rail carriers. There is great growth potential in that as we come out of this tough economic time.”

Buckingham points to some highlights of his time as a councillor, which include working with both provincial governments and the Federal Government to make the Wastewater Treatment Plant a reality. The downtown area revitalization plan, working towards economic feasibility and stability were also touched on as ways council is looking to attract new interest to Lloydminster.

He adds this council’s introduction of Governance and Priority Meetings allows for a “second sober thought” allowing for policies to be fully weighed before being voted on.

All nominations for City Council, Mayor and school board positions opened September 22nd and will close at 4 PM on October 7th. Voters will then go to the polls on November 9th.