Tickets to Rock for a Cure on sale 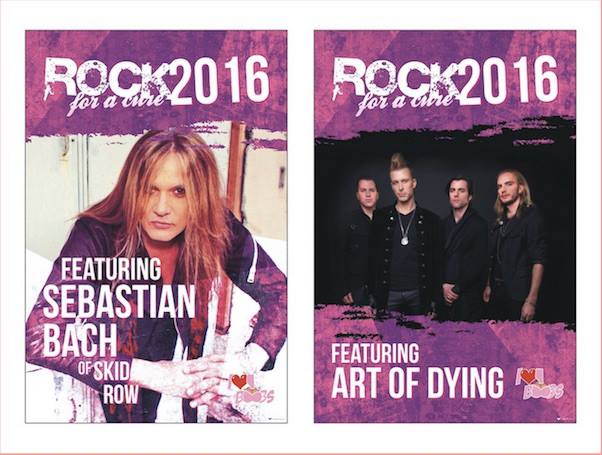 Rock for a Cure is back.

Tickets to the 7th annual rock concert go on sale today, with all proceeds going to the clinical trials unit of the Alberta Cancer Foundation, which works to get drugs into the hands of patients more quickly.

I Love Alberta Boobs President and Co-founder Brandy Schwenk says the concert is bigger than ever this year.

“This year, we are having three bands,” Schwenk said. “Our opening band is local band Artificial Lift, which we’re so excited about because last year we couldn’t fit them in, but they did shave their head and raise money for us, so we’ve got them opening. Next is Art of Dying, a Canadian band, and I’ve gotten to know lead singer Johnny [Hetherington] really well, and they’re so pumped. He was born in Alberta, so they’re super pumped to come and play for this.

“And then, our big headliner, as most people know by now, is Sebastian Bach of Skid Row.”

Schwenk says that this year’s concert will be in tribute to a woman who recently passed away from breast cancer, Marlayne Argue.

“I’ve always wanted to talk about Marlayne, but I didn’t want to step on family’s toes,” she said. “When she did just recently pass, I contacted the family right away, and I said ‘Do you mind if we do this, and dedicate this year to her?’ I think it’s a way to bring the community together, and to remind them, I’m not just doing a rock concert. It is a lot of fun, it’s great, but there is a reason behind it. We are trying to save more peoples’ lives. We don’t want anymore tragedies like Marlayne’s, because she was so young, and she was so beautiful.”

Schwenk also says visitors will have a chance to participate in live and silent auctions. Tickets are $80 apiece, or $740 for a table, with a meet-and-greet with Bach costing an extra $100.

To buy tickets, donate to the auctions, or to become a sponsor, call Schwenk at 780-808-9624, or by messaging I Love Alberta Boobs on Facebook.