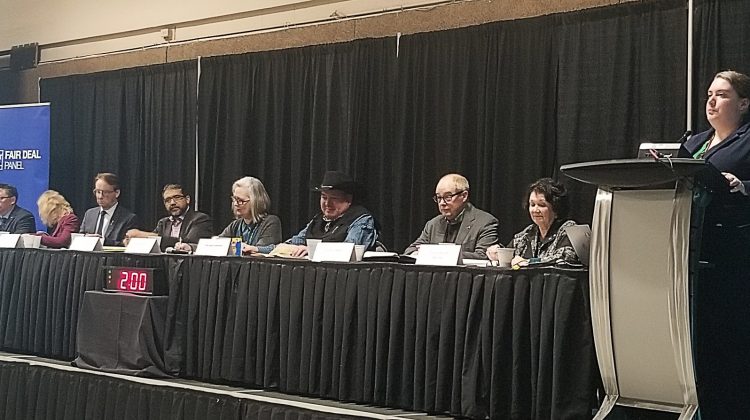 Lloydminster and area residents voiced their thoughts on how Alberta can get a fairer deal.

About 85 people gathered in the Stockade Convention Centre on January 13 for the latest Fair Deal Panel. Twenty people, from as far as Cold Lake to parts of Saskatchewan, went up to the microphone and were given two minutes to share their opinions and stories on whether Alberta is getting a fair deal in the federation.

Topics brought up ranged from the Paris Agreement and climate change to equalization payments and separation.

Vicki MacFarlane spoke to the panel about equalization and believes that it is wise of the Albertan government to inform the East about how valuable the province is.

“I believe that equalization is definitely a priority. I also believe that taking back the pension for our people rather than overcontributing to the CPP is a very good step.”

She hopes the suggestion gathered from the panels will help bring about a fairer deal for Alberta.

“I like the fact that Premier Kenney is asking for grassroots suggestions. I believe people working at the bottom often have the best ideas and strategies to help out the organization at the top.”

Tracy Martineau shared a story about her daughter and her struggle to find a job in her industry and how she isn’t able to afford a place for herself. Tracy questioned the panel whether the topics listed for the panel will lead to jobs for people with the right qualifications.

The topic of separation came out several times during the panel with people on both sides of the issue speaking on it.

Councillor Michael Diachuk, like Martineau, wondered whether the issues brought up would really have an impact on Lloydminster and its economy.

“If this is really significant, it should be long-term and relative to Alberta’s position within confederation over a longer period of time and not just during a time of economic downturn and frustration with current politics,” says Diachuk.

Vermilion-Lloydminster-Wainwright MLA Garth Rowswell was in attendance and says many of the points brought up in the panel are the same frustrations he hears from his constituents.

“People are saying how can we get the message out to the rest of Canada and have them listen to us and know that we’re serious,” says Rowswell. “We’ll see what they write but I think that’s what the Fair Deal Panel is hearing in their various meetings around the province.”

“[Every panel] has a local flavour,” says Kennedy-Glans. “I think it’s important for people to understand that it’s not a one solution fits all. There’s a deeper understanding of certain issues in certain communities because their experiences have been different.”

Kennedy-Glans says the most challenging part will be to create a report that reflects the province as a whole. With Lloydminster being a border city, she says it will bring unique perspectives on the issues.

The panellists will consult with experts about the suggestions made during the panels which will then be compiled into a report. They will then make recommendations to the government with the report being due on March 31, 2020.

The panel will make two more stops, Airdrie on January 16 and Medicine Hat on January 17. Input on the fair deal can also be made online.