Colleen Young projected to be re-elected as Lloydminster MLA 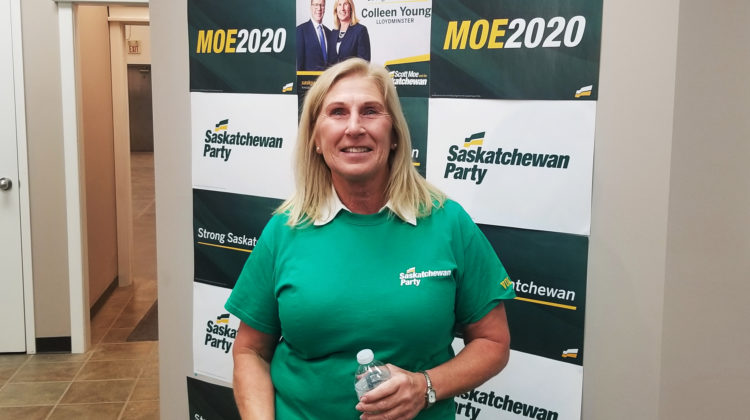 The Lloydminster riding is staying with the Saskatchewan Party as Colleen Young is projected to take the election with about 83 per cent of the votes.

Young secured her second full-term with 3,724 of voters of 51 out of 51 polls reporting at time of publication. Young first took the seat in 2014 following a by-election and was voted back in for her first full-term in 2016.

“I’m very excited, honoured and humbled that the constituents of Lloydminster have once again elected me to represent them in the Legislature.”

She says she will continue working with Mayor Gerald Aalbers to advocate for improvements to the health services in the Border City as well as act on rural crime issues and better internet services for rural communities in the constituency.

The Saskatchewan Party is projected to have a majority government this election for a fourth consecutive term with Scott Moe as the head of the party.

“We’ve got work to do and I’m glad to be able to get back to that work as a majority government and make good decisions to push the economy forward in the recovery of our province through this pandemic.”

Her opponents this election were NDP candidate Colleen Morrell Henning, Steve Gessner with the Buffalo Party of Saskatchewan and Audra Kish of the Saskatchewan Green Party. Henning secured 483 ballots as runner-up. Gessner had 231 votes and Kish took fourth with 52 ballots.

“For anyone to put their name forward for this type of public service, I commend them for it. It is a tough job and there is a lot involved in it and for them to stand up for the public and want to represent the people of this constituency, good on them.”

A second preliminary count is scheduled for October 28th and a final count on November 7th where the election will be finalized. Mail-in ballots received before October 26th will be counted in the second preliminary count, while ballots received after the date will be factored in to the final count. A total of 197 vote-by-mail ballots were issued for the Lloydminster riding.

Elections Saskatchewan has the full provincial results available on their website.

EDIT: The article has been edited to reflect the numbers of all ballot boxes counted.