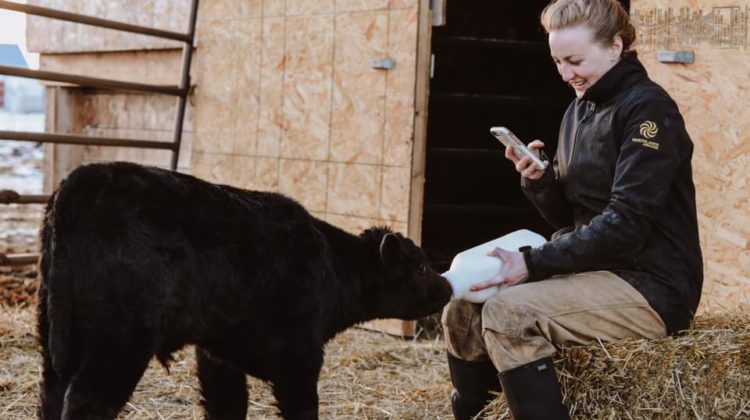 Charlotte Wasylik was named one of the Top 50 most influential people in the Canadian agricultural industry. (Chatsworth Farms, Facebook)

Charlotte Wasylik is being recognized for her work in showing off the Canadian agriculture industry in new ways.

She was one of 50 Canadians who made it onto the Canadian Western Agribition Top 50 most influential people. The list is separated into five categories with 10 entries in each category. Wasylik was a finalist in the upstarts category which acknowledges future leaders in agriculture who promoted the industry in non-traditional ways or were early adopters of new ideas.

“It was certainly a surprise and a wonderful honour to be included in a list of very influential and inspiring people within the agricultural community.”

Wasylik started in the industry at a young age working on her parents farm, Chatsworth Farm, and took part in local 4-H Club activities and the Vermilion Agricultural Society. Even after moving to Edmonton for college, the farm life was never too far away. While studying Event Management, Visual Design and Digital Publishing at NAIT, Wasylik worked as an event coordinator for Farmfair International at Northlands.

“That’s where I got a really good introduction to large-scale livestock events and shows and I made some wonderful connections there.”

She then returned home in 2019 and took on the role of Marketing Coordinator at Vermilion Credit Union while also helping out on her parent’s farm. A year later, Wasylik started to think about running a virtual tour of the farm, first for her family but then opening it up to the wider public later on.

“In 2020, once lockdown started in Alberta, I saw an idea about virtual safaris and I thought I could do that with our farm since we were in the middle of calving. I wanted to share the fun and excitement around calving with friends and family who weren’t able to visit at the time and it turned into something much larger than that.”

In the summer, Chatsworth Farm invited visitors to their grounds as part of Open Farm Days. Wasylik says it was their first time being a part of the initiative and it was a great success with 151 people dropping by to see the animals and learn more about agricultural practices.

“It was always something we wanted to participate in but with busy seasons of haying and family get togethers we weren’t always able to fit it into our schedule. Everything collided in 2020 and gave us the opportunity to host Open Farm Days.”

She says they are planning to be a part of Open Farm Days again in 2021. She also adds she will also continue offering virtual farm tours in the future as she says there is still a great interest how food gets to people’s tables.

“I’m getting requests from different countries. They wouldn’t be able to visit our farm. It’s great to be able to share agriculture with them and it’s so exciting to see how eager and how full of questions the attendees are whether they’re five or 50. I think agriculture has a unique draw and people are curious about learning where their food comes from and how farm animals are taken care of and raised.”

Wasylik adds she’s happy to be a part of a list which includes Jess Verstappen, a 4-H friend from High Prairie, and Jill Harvie from Olds who Wasylik says she greatly admires.