Saskatchewan RCMP investigating after officers shot at while driving

The Saskatchewan RCMP is looking for suspects after police officers were shot at near the Mosquito First Nation.

Around 10:15 PM on September 21st, The Battlefords RCMP was alerted that someone was travelling to the Mosquito First Nation with guns. While following up on the call, the officers were pulled up on by a blue Chevrolet Cruze, which fired at the officers as they were driving by.

The hood of the police car was hit, but no one was hurt. The suspects took off, eventually stopping at a home in Mosquito First Nation. The Cruze was seized, but the suspects escaped on foot.

The Saskatoon General Investigation Section has taken over, with the assistance of several detachments. The scene of the firearm discharge, the home on Mosquito First Nation, the police vehicle and the Chevrolet Cruze are being processed for evidence.

Investigators would like to speak to anyone who saw the Chevrolet Cruze on the evening of September 21st. Anyone with information is asked to contact the RCMP or Crime Stoppers. 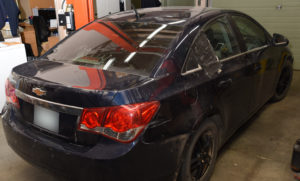 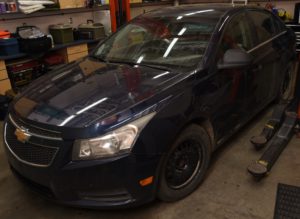