Lloydminster RCMP seize over $600,000 worth of drugs 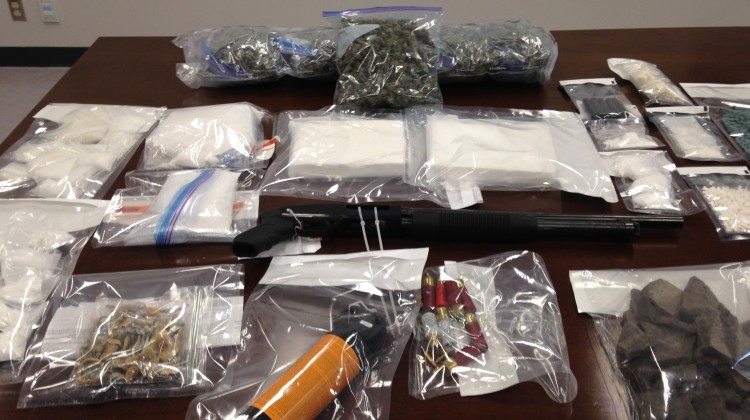 The Lloydminster RCMP have held a press release at the Detachment.

On April 26th, the RCMP revealed the fruits of their labour, in the form of numerous illegal drugs confiscated in a recent and major drug bust. The seizure yielded 2 1-kilogram bricks of cocaine; 450 grams of powder cocaine; 219 grams of crack cocaine; 894 grams of heroin; 368 grams of crystal meth; 3.3 lbs of marihuana; 6 50-mL vial of hash oil; 1355 grams of unknown white powder; and 816 fentanyl pills.

A concerning note for officers was finding pills that look like legally manufactured fentanyl and Xanax, but tests will likely confirm them to be illegally manufactured. Fentanyl trafficking, in particular, has been an ongoing issue in the border city and across Alberta. Counterfeit pills containing fentanyl are the leading cause of the spike in drug-related deaths in the province.

“We will take samples of those drugs and send them off to our lab. There are many different purposes why we test drugs. One, we have to be able to prove what it is for sure to substantiate the charge. The other is to check out the potency or the quality of that drug,” explains Kirzinger.

Two search warrants were carried out at Lloydminster residences on Saturday, April 23rd. A shotgun with the serial number filed off was also confiscated. Constable Grant Kirzinger says it’s the biggest bust of the year. The street value of the drugs alone is in excess of $600,000.

“This is definitely a large bust for us. It’s something that, you know, in 2016 we haven’t seen, and even back into 2015, we haven’t seized drugs that had that high of a street value. In addition to that, we also seized a Ford F-350 truck that was worth close to $90,000,” explains Kirzinger.