Tow truck operators, emergency responders reminding the public to “Move Over and Slow Down” 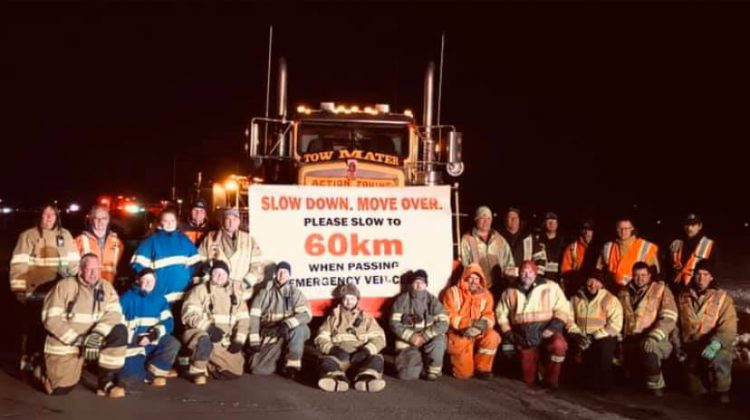 Local tow truck companies will be on both sides of the border advocating for safety. (Action Towing and Recovery Services, Facebook)

Lloydminster tow truck operators and emergency responders are bringing awareness to the dangers of roadside assistance and ask drivers to “Move Over and Slow Down” when passing them.

John Buhnei, owner of Action Towing and Recovery Service, says the initiative originated in Saskatchewan with the Roadside Responders Association of Saskatchewan following the death of a tow truck operator near Esterhazy.

The law requires drivers to slow down to 60 km/h and move over to the open lane when passing a tow truck or any other emergency vehicle. Speeding past them carries stiff penalties including higher fines and extra demerit points. Buhnei says incidents like that can happen anywhere and mentions the two highway road workers who were struck near Mannville in December.

“They had their emergency lights, the pylons and everything else out and a vehicle ran into them and hurt them very, very badly. It hospitalized the two gentlemen and one of them got hurt so severely that he may never return to the workforce.”

“We need people to be aware and slow down for those few seconds while they’re passing people who are working on the highway. It isn’t going to change their life at all but if they run into us then it sure is going to change ours.”

Buhnei adds he’s noticed an increase in distracted driving and believes the problem has gotten worse over time.

“I’ve been at this towing business for a long time and I can honestly say that 25-30 years ago it wasn’t as nearly as bad as it is today. It just keeps getting worse. The vehicles and people are going faster and it’s really dangerous to go out and work on the highway.”

On March 10, tow trucks and emergency vehicles will be gathering in both east and westbound lanes on Highway 16. Drivers will be able to spot them at the roadside turnout about 2 kilometres west of the city and near the turnoff to the Husky refinery from 7 to 8 p.m.

Buhnei asks drivers to slow down as they’re driving by and show their support with a wave or pull over and chat with them. He says they will be social distancing and masks are mandatory. He adds they will also have extra safety vests for those who want to experience what it’s like working on the side of a highway.

“They can feel it and see it. It’s scary business being out there on the road.”