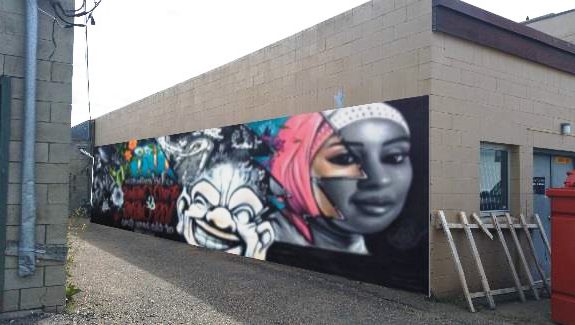 The wall can be found in the alley behind the Sunlife Financial branch located at 4802 50 Avenue, and can be accessed via 48 street.

Members of the public are invited to paint on the wall, as part of the committee’s Alley Art program.

Serena Sjodin, Assistant Executive Director of the Chamber of Commerce, says the wall is meant to reduce graffiti in the city.

“Studies have suggested that murals do deter graffiti, because then it will give the artist the opportunity to go there and have their creative expression put up onto the graffiti wall,” Sjodin said. “There is quite a bit of graffiti currently in the back alleys, and we’re just slowly trying to get that covered up,  because when you just paint over the graffiti, it’s just a canvas for graffiti taggers to go back there and tag it again, so you’ve gotta do the things like the murals, to keep from the re-occurring graffiti tagging.”

Streetscapes says they will monitor the wall and remove any offensive posts. The wall will remain open until it becomes too cold to paint.