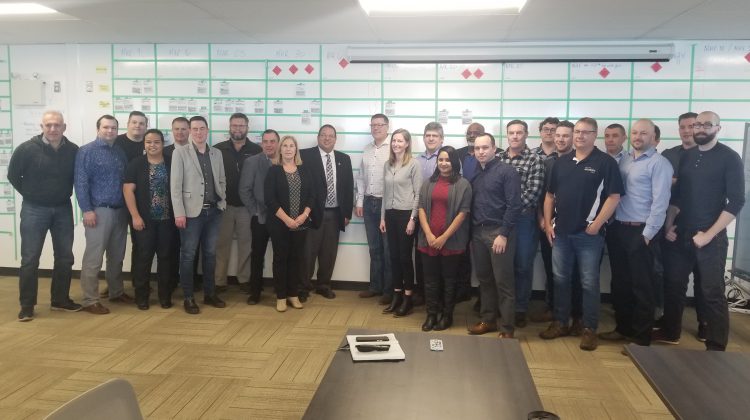 Lloydminster city staff gave the premier of Saskatchewan an update on the wastewater treatment plant during his visit. (Photo submitted by: Nikita Ganovicheff, mylloydminsternow.com)

The premier of Saskatchewan made a stop in the Border City on his provincial tour.

Scott Moe was invited by Lloydminster MLA Colleen Young to visit the city while on his tour of the province. On February 25, he sat in on a presentation about the new wastewater treatment plant plans which is partially funded by the Saskatchewan government.

“[We’re] looking for not only good value for the investment which is being provided by the federal, provincial and municipal governments here in Lloydminster but also to ensure the quality of the project.”

Moe also discussed recent news such as the Alberta Court of Appeals ruling on the federal carbon tax. He calls the tax unconstitutional, ineffective and calls for its removal on all Canadians until the Supreme Court makes a ruling on it.

He says if the tax were constitutional it would stand every court challenge in every province every time. Moe says they’ve also again asked the federal government to remove the carbon tax on grain drying.

On the issue of Saskatchewan teachers voting in favour of sanctions and possible strikes, Moe says they’ll continue to bargain collaboratively with the hopes of making a deal that is good for both teachers and students.

“We have put to date an offer up to educators that we think is a fair offer. An offer, if it was accepted, would result in our Saskatchewan teachers being 5 per cent above the Western Canadian average. We feel that it is a very strong offer and I think speaks to the value that we place with respect to the educators we have right across this province.”

When discussing the recent state of emergencies declared by Saskatchewan First Nations communities such as Onion Lake Cree Nation and Makwa Sahgaiehcan First Nation, he says there is no single solution but his government will continue engaging with those communities to address the challenges they face.

He says both the provincial and federal governments have added resources to the northwestern communities with more members from the Protection and Response Teams and Gangs and Guns Unit being brought to those communities.

“A larger, broader conversation on a number of different issues from law enforcement to supports and we’ll continue to do that on the local level not only in Onion Lake but right here in Lloydminster and surrounding communities.”

Mayor Gerald Aalbers says he and the city council spoke to the premier on several other topics during his visit. The two main topics brought up outside of the wastewater treatment plant were healthcare and policing.

“We’ve been challenged with some healthcare issues. Mainly EMS has been a concern in the community. We talked about EMS and the Memorandum of Understanding that recently expired and needs to be renewed. We talked about police funding. There were some changes made years ago in police funding in the city by the province of Saskatchewan and we’ve asked the Premier to restore that funding.”

Aalbers says the premier also hinted at infrastructure being a focus for the provincial budget which will be released on March 18.