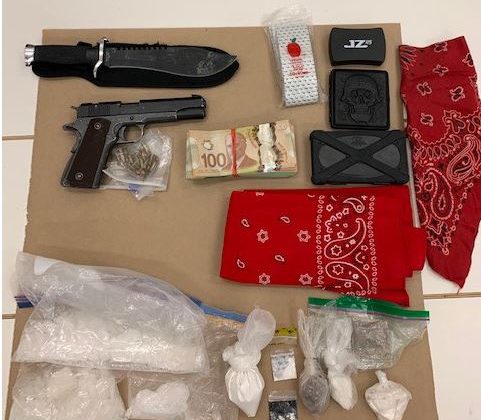 Two suspects were arrested January 10th, and a search of the vehicle allegedly found weapons and drugs. [Lloydminster RCMP, supplied.]

The Lloydminster RCMP says two people have been arrested and a large amount of drugs seized after a bust last Sunday.

Around 4 AM on January 10th, police attempted to stop a suspicious vehicle driving around with no license plate in the 50th Street and 57 Avenue area. The vehicle did not stop, however, and officers chased it until is slide out on the frozen road, hitting a median.

The driver, a man, ran on foot while a female suspect, 20-year-old Bianca Lasas from Lloydminster, was arrested on scene.

The RCMP say the second suspect, Courtlin Littlewolfe, 34, of Onion Lake was arrested on January 16th.

Both Lasas and Littlewolfe are facing trial on 31 charges, including alleged trafficking, weapons, identity fraud and flight from police and dangerous driving charges, among others.

Both suspects remain in police custody as they await their next court date.