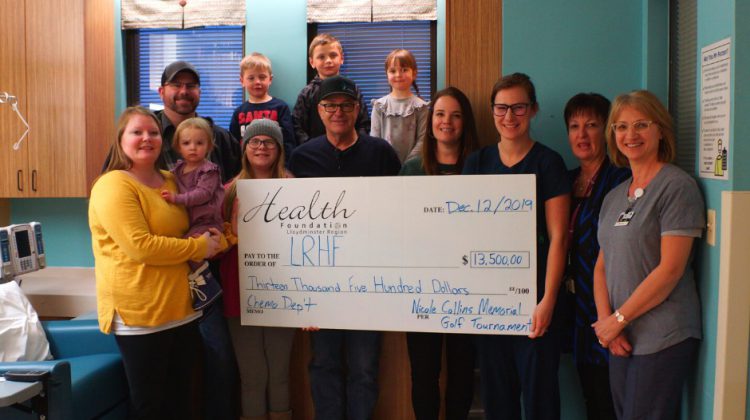 Since 2016, a family has raised over $50,000  for the Lloydminster Community Cancer Centre in memory of a wife, daughter and mother. Last month, the Lloydminster Region Health Foundation was given a $13,500 cheque through proceeds raised from the Nicole Collins Memorial Golf Tournament in 2019.

Nicole’s family host the annual golf tournament in Silver Lake, Saskatchewan with the proceeds going towards the facility where Nicole spent the last month of her life. After a supportive experience by staff, while she was at the Lloydminster Hospital in Palliative and Cancer Care, Nicole’s family decided to give back to ensure everyone receives the same experience.

LRHF CEO Malcolm Radke says everyone involved in the event from family to volunteers and participates should be proud, because Nicole definitely would be.

“It all stays local and will help a thousand visitors that go into the hospital to use that cancer centre. Just simply improving the comfort and level of care they’re able to receive at home.”

The Alberta Cancer Foundation and Lloydminster Region Health Foundation announced its $50,000 renovation plan for the community cancer facility in November.  Proceeds from the tournament will go towards LRHF’s $25,000 commitment towards renovations at the Cancer Centre.

With the hospital being built in the early 80s, Radke says it’s time to make changes to the hospital and the cancer centre is no exception.

“It’s time for a modernization, some touch-ups, to make things easier for the nurses, and make things more spacious for the patients so at that moment when they’re receiving that chemo treatment they’re in the best state of mind as possible.”

In the last year, nearly 100 patients visited the Lloydminster Community Cancer Centre more than 1,350 times, up slightly from the previous year.